Backups aren't worth anything unless you know how to restore from them, and you've tested the restore procedure to prove your backups are good. What's more, you'll gain that much more clarity about your backups. Sometimes, you don't have backups but you lose data and you're faced with the daunting task of restoring from corrupted media or deleted files. Either way, once disaster strikes, you'll want good information on how to Restore.

There are three primary use cases or types of backups:

Given the different goals of what one might mean by the term "backup", there are naturally different solutions that work best in each scenario. If you are a technical user, you must get familiar with RSync. Even when you need to employ other systems or tools, RSync is the swiss army knife of backups.

Scenario A (Operational Backups) is very much like Scenario B (File Backups), with the distinction that it obviously multiplies the number of machines included, and is meant to persist through time as a component of your organization's operations and disaster recovery plans. You may effectively use these techniques in your home or home office just as much as they benefit businesses.

You could use RSync here, but by the time you get into the complexity of operational backups, you probably want to employ an application that offers even more flexibility, administration and power. 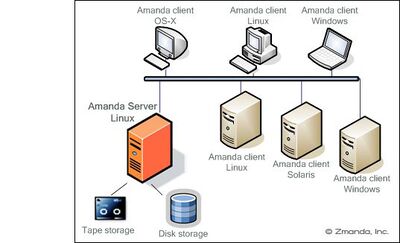 One of, if not the best, solutions for operational backups is Amanda. Amanda is both an open source project, and commercially supported through the Zmanda corporation.

This could also be called "Application Backups", because oftentimes, the goal in this category is to make a backup of an application prior to making major changes to the application, such as an upgrade. Or, it could be close to copying every file on a particular computer to some backup location. One distinction that I think characterizes "file backups" compared with "operational backups" is duration. If the backup is motivated by the thinking "Let's put this somewhere where we can still get at it for a while but we'll eventually throw away the backup when we're sure we have everything we need moved or migrated" This is a file backup. You still could be backing up nearly a full operating system, but you're probably not interested in applications as much as their settings and configurations. In many "File Backups" scenarios, you have a specific set of files that you're targeting. For example, "We're going to do a full upgrade of the website, so let's create a backup of the site before the upgrade." Another distinction is who is doing the backup. I consider "File backups" to be initiated by the user (even if that user is a system administrator, developer or database administrator) whereas Operational Backups "just happen" (with a Technology Services or other operations team responsible for making them happen).

These are the disks that I have to preserve by copying the good, throwing away the bad.

One of the first tasks at hand was to mount my old Windows drive in a way that made it accessible to me (as opposed to read-only to root) Learn more about this at https://help.ubuntu.com/community/AutomaticallyMountPartitions

You can learn the identifier with the command:

But it turns out there is a simpler way of finding out what the volume id is for a disk drive:

So if you've identified the disks you want to backup, and mounted them, you also need to be aware of the parts you DO NOT want to backup. On a Linux system, the list of EXCLUSIONS would include

I added the --dry-run option in there because you should always test first, and because I do not want anyone blindly copy and pasting this command without testing and tweaking it.

So, when it came to using a backup program, I chose Mondo Rescue because it can backup to CD, DVD, disk (e.g. external USB drive) or other mediums like tape drives. Plus, it can create a restore disk for you which is what I want... in the case of catastrophic system failure, I want to be able to recreate my computer on new hardware.

This is the command that I used to create a full system backup of my laptop hard drive to my external USB drive:

At first, the backup failed with a message that it thought my drive was full. But in reality, it was a problem with the tmp partition being too small so then I added the -S and -T options and it worked fine.

Basically, I have to "reduce your kernel's size" if I want to create a boot floppy, but it doesn't matter if I want to use a boot ISO instead.

On a more recent "backup" effort, I needed to archive off the contents of a laptop to an external USB drive that was mounted on another system. The source system was a Windows XP machine, while the target machine was running Linux. The tools I used to make the backup were dd[1] and a LiveCD of the Linux Mint distribution. By inserting the Linux Mint Live CD, and rebooting the laptop, I would have access to a bash shell that I could then run the dd tool from. Not only that, but I could use the Secure Shell to pipe the command over the network to the target machine's mounted external 1TB drive. Note that in my case, I used a private key (identity file) to authenticate my ssh session.

Backing up ~94 GB with MondoRescue to image files with medium compression could still generate around 20 4GB DVD images. That is a lot of data and will take a significant amount of time.

Backup up ~60 GB of data across a USB 1 interface using rsync and -z for compression will take over 1 day. In fact it will take over 10 minutes to generate the file list. My experience was with 874,490 files.

Similarly, if you are backing up across a network, then you can get dramatically slower results than if the source and target are local. For example, in my most recent backup, I was able to copy 18GB over a wireless network but it took 43,712 seconds (over 12 hours). 19GB over a local USB2 interface took 1,037 seconds (17 minutes).

In most backup scenarios, the first backup is the one that takes the most time.