Kubernetes is an open source system for managing containerized applications across multiple hosts. It provides basic mechanisms for deployment, maintenance, and scaling of applications.

It's important to note right up front, before you dive into Kubernetes, that minikube is the tool for local Kubernetes.

For hands-on interactive learning, head over to https://Katacoda.com

When you deploy Kubernetes, you get a cluster. The cluster is composed of many components. Here are brief details on some of them.

The API server is the front end for the Kubernetes control plane.

Control plane component that watches for newly created Pods with no assigned node , and selects a node for them to run on.

An agent that runs on each node in the cluster. It makes sure that containers are running in a Pod .

kube-proxy is a network proxy that runs on each node in your cluster, implementing part of the Kubernetes Service concept.

The container runtime is the software that is responsible for running containers. Docker by default, it can also be CRI-O or possibly other implementations of the Container Runtime Interface.

You probably need at least the DNS and Web UI addons.

Kubeadm is a component of Kubernetes.

Kubeadm is a tool built to provide best-practice "fast paths" for creating Kubernetes clusters. It performs the actions necessary to get a minimum viable, secure cluster up and running in a user friendly way. Kubeadm's scope is limited to the local node filesystem and the Kubernetes API, and it is intended to be a composable building block of higher level tools. 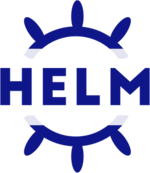 The package manager for Kubernetes

Helm (github) is a tool for managing Charts. Charts are packages of pre-configured Kubernetes resources.

RedHat has a registry at quay.io. Quay builds, analyzes, distributes your container images.

For example, see the bitnami manifest for MediaWiki. What's really interesting is that not only can you quickly look at the manifest, they also show you a list of all the packages built into the image. Most importantly, they do a security scan for vulnerabilities and even show which layer the (vulnerable) package is introduced in.

There is a Helm chart repository at https://hub.helm.sh/ There you can find the chart for Bitnami MediaWiki

Bitnami has it's own chart repository at https://charts.bitnami.com/ (nothing to see there). The GitHub repo is https://github.com/bitnami/charts

Each cloud provider has customized their offerings for Kubernetes to integrate with their platforms. So we have:

A Pod (as in a pod of whales or pea pod) is a group of one or more containers , with shared storage/network resources, and a specification for how to run the containers. https://kubernetes.io/docs/concepts/workloads/pods/

A Pod (as in a pod of whales or pea pod) is a group of one or more containers , with shared storage/network resources, and a specification for how to run the containers. https://kubernetes.io/docs/concepts/workloads/pods/

is a next generation system container manager. It offers a user experience similar to virtual machines but using Linux containers instead.