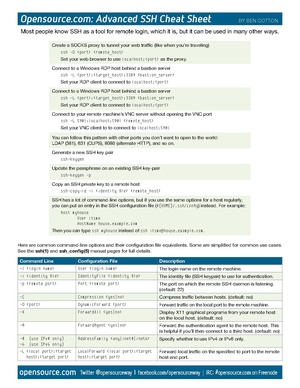 HOWTO can be found at http://www.debuntu.org/ssh-key-based-authentication

Another good site with HOWTO and explanatory info, along with commercial products and support, is https://www.ssh.com/ssh/

Setup a local user configuration for your SSH sessions to make things much easier.

Note the KexAlgorithms line for GitHub. You might need to add this if you're getting a 'failed to negotiate a key exchange' error from github. See ssh -vQ kex for the algos your system supports. And fix up your moduli file [1]

It is strongly recommended that LogLevel be set to VERBOSE. This way, the key fingerprint for any SSH key used for login is logged. This information is important for SSH key management, especially in legacy environments. 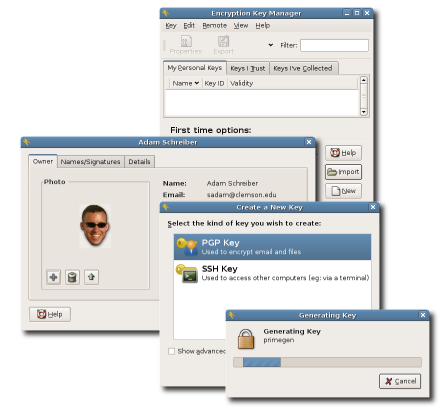 Installing a program like Seahorse makes it trivially easy to manage your GnuPG encryption keys. Seahorse just makes it easier for you to do what you otherwise would accomplish with several commands. You can generate a private key; and add the public key to remote servers enabling you to login to those remote servers without using a password.

The SSH key fingerprint tells you the authenticity of a host. Normally this info is stored in /etc/ssh/ for a Debian-based distro. You can also use the same command here to look at the fingerprint for your public key.

Normally, with ssh-keygen -t rsa -C "you@example.com" you get a (private) key file id_rsa, plus a (public) key denoted with the extension .pub id_rsa.pub. But what about formats like .pem? Amazon AWS manages access with "keypairs" and you are prompted to download the private X509 certificate file as a .pem file when you generate the keypair. Where is the public key? Amazon displays the 'fingerprint' for the file which is usually enough to identify the private file, but can you place a fingerprint in the authorized_keys file? If you have a private key file and want to show the public key that corresponds to it, you can do so with ssh-keygen

You can then append this to the /home/ubuntu/.ssh/authorized_keys file on your AWS linux host to enable another key to login to the host.

Sometimes you have so many keys, that you can be denied access even when supplying a key file with the --IdentityFile or -i option. The problem is that you would assume that ssh -i /home/me/.ssh/my_private_key me@example.com is directing ssh to use a specific key. That's not what's happening. Instead, it's adding that key to the list of keys that it would otherwise present to the server. That list of keys (in your ssh-agent, if running) found in your .ssh directory may well contain 3 or more. And thus, you get blocked by authentication failure (using the wrong keys) before your added key is tried. Use the somewhat misnamed option IdentitiesOnly (should be named ThisIdentityOnly) to solve this problem. IdentitiesOnly will instruct SSH to use ONLY the keys you tell it to use.

Sometimes you can get an error about too many authentication failures when you want to enter your password, but before you even get to enter your password. This can happen when the source system silently offers a couple of keys (which are not authorized on the target host). If the target host has a very low tolerance for auth failures in sshd_config like MaxAuthTries=2, they you'll get disconnected before you ever enter a password. The way to counteract this is to tell ssh not to use Public Key Authentication at all: ssh -o PubkeyAuthentication=no me@example.com

You have a headless server running your development or production database(s). You work on a nice workstation or laptop. You want to use a graphical database administration tool like MySQL Workbench on the remote server.

To find out what is connected and/or listening on a given port, you can use lsof with the -i option for Internet files e.g.

Maybe you've got a production database server that wasn't setup properly for security, and only allows "local" database connections. You need to access your production data from places other than your datacenter. You could fix it - but that would take a lot of effort that the boss doesn't care about. SSH to the rescue!

To setup the reverse tunnel from DESTINATION to SOURCE, you first get on the destination box and ssh to the source while telling that ssh session to "listen" on a high-number port

on DESTINATION (where you want to use the data)

Then you get on the source machine, and ssh to localhost, but specify the high-range port number you reserved earlier.

If you do these in screen sessions, they should survive any network connectivity issues and you can log out completely. See above config section to set this up by default for certain situations.

If you need to pass SSH options to rsync, then use the --rsh= (-e) option.

On the server side, to see what's going on, tail /var/log/auth.log